The lunches I packed for my kids for Day Two of the $2 Lunch Challenge were pretty similiar. I only made a few adjustments for my son. Here is my daughter's lunch which cost a total of $1.98: 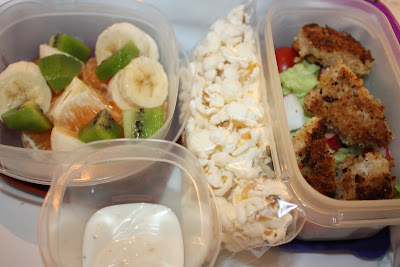 Here is how it broke down:

My son is not a salad eater (I'm still trying), so I substituted the salad for two chocolate strawberry yogurt covered pretzels from the bulk bin at Whole Foods. I know the salad is much healthier than the pretzels, but we're working on it. His total came to $1.92.

Had they eaten at school, it would have set me back $4.25 for this: